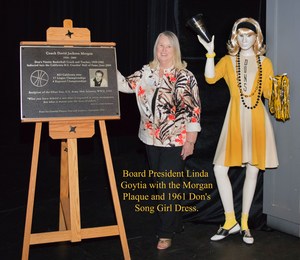 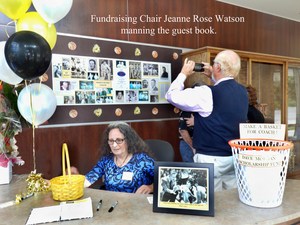 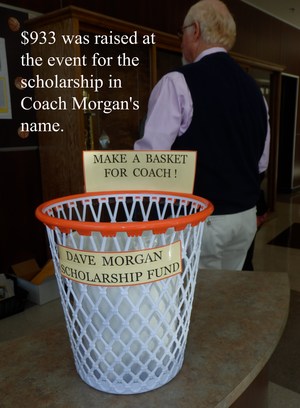 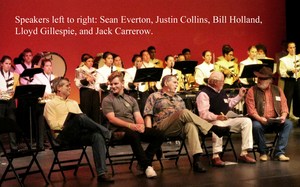 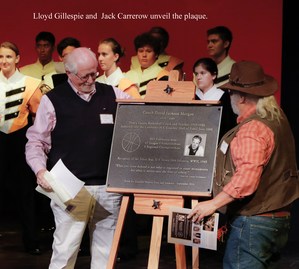 Former players and colleagues of Coach Dave Morgan, who served as Del Mar High's varsity basketball coach from 1959-82, gathered to honor his legacy by dedicating a plaque in his name on September 23, 2016.
Something extraordinary happened at Del Mar High School on September 23. Fans of legendary basketball coach David Jackson Morgan were finally able to see him recognized for his amazing contribution to the sport and to the lives of his students. His California record of 823 wins was unsurpassed until 2003. For many years, his students and players sought to have the Del Mar gym named for him. Thanks to Board President Linda Goytia, who organized an effort to create and purchase a bronze plaque in his honor, fans and supporters of Coach Morgan will now be able to commemorate his accomplishments with the installation of a bronze plaque in the gym lobby. Del Mar alumna Jeanne Rose Watson took charge of the fundraising and President Goytia handled arrangements for the dedication and which took place in the Del Mar Performing Arts Center followed by a reception on the green adjoining the theatre.
The ceremony featured the Del Mar JROTC Color Guard, the Del Mar High School Marching Band, and speakers from as far away as Southern California. A particular highlight was a brief presentation by Coach Morgan’s granddaughter, Devin Bonnar of Fresno. At the conclusion of the evening, it was announced that supporters of Coach Morgan had not only raised funds to secure the plaque, but so far exceeded their goal that they were able to endow a scholarship in his name to be awarded annually by the Del Mar Don’s Club in the amount of $823—one dollar for each California win. The scholarship is fully funded for the next three years, and all concerned have vowed to keep it going.
When Del Mar opened in 1959, Dave Morgan was hired as the first basketball coach and served for 23 years, amassing a record and a following few could ever match. His teams at Del Mar logged 823 wins, 17 League Championships, four Regional III Championships, two third place finishes in the CIF Tournament of Champions, and two third-place finishes in the Peninsula Basketball Tourney at Stanford. Coach Morgan is the only CUHSD coach to be inducted into the CA Coaches Association Hall of Fame.
Dozens of his players have gone on to play for major college basketball teams: one started for UCLA as a sophomore on John Wooden’s first final four team in 1961. Two players had professional careers in the NBA, and two others won Super Bowl rings as professional football players. Mark McNamara, Dick Vermeil, and Terry McDonell, managing editor of "Sports Illustrated," cite Coach Morgan as an inspiration in their lives. Often referred to as the "Dean of California Coaches,” Coach Morgan retired in 2000 at the age of 82 as the oldest active coach in California history, having been lured out of retirement by Denair High School Players and students alike cite him as a father-figure and a powerful influence for good in their lives. David Jackson Morgan was also a recipient of the Silver Star, U.S. Army 38th Infantry, WWII, 1945. At age 19, he single-handedly took out an entire machine gun nest in the Philippines.
Del Mar's former dean of students, Lloyd Gillespie, reminisces about Coach Morgan's retirement in 1982 and the years following.
Print