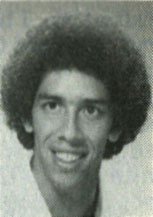 Ray Townsend, a point guard at Camden High who became Del Mar's basketball coach in the 1990s, is inducted into the San Jose Sports Hall of Fame.
Original article by Dick Sparrer in San Jose Mercury News.
It was a different time for high school basketball in the Santa Clara Valley.

Fans packed into local gymnasiums to watch the best match-ups and see their favorite schools play. In fact, it wasn’t uncommon for fans to be turned away long before the start of the varsity games with the bleachers filling up prior to tip-off for frosh-soph prelimin.

One such game back in the winter of 1973 featured the powerhouse Del Mar Dons visiting now-defunct Camden High School in a key West Valley Athletic League clash.

Del Mar was a perennial WVAL powerhouse, but the Cougars were in the midst of a sensational season—largely because of the play of high-scoring 6-foot-3 point guard Raymond Townsend.

Townsend was an incredible talent, averaging nearly 28 points per game back in the era before the three-point line. He would go on to star at UCLA and play for the Golden State Warriors in the National Basketball Association.

And now, more than 30 years after his playing career came to an end, he is being recognized for his accomplished by his hometown with his induction into the San Jose Sports Hall of Fame.

The four Santa Clara Valley sports superstars will top the bill when the San Jose Sports Hall of Fame holds its 22nd annual induction ceremonies on Nov. 2 at the SAP Center in San Jose. They will each be recognized with bronze plaque that will be permanently installed on the concourse of the SAP Center as a testament to their induction in the San Jose Sports Hall of Fame.

Townsend, the first Filipino-American to play in the NBA, was a high school sensation at Camden before going on to play on a national championship team in 1975 for legendary coach John Wooden at UCLA. He won All-Pac-8 first team honors as a senior in 1978 and was drafted by the Warriors. He played two seasons for Golden State and finished his NBA career with the Indiana Pacers before playing in Italy for Virtus Banco di Roma in the 1984-85 season.

He returned to San Jose and created the RT Basketball Development League, serving as the organizations executive director for the past 24 years.

Wagner, like Townsend, was born and raised in San Jose and was a four-year starter on the Presentation soccer team, leading the Panthers to two Central Coast Section championships and winning back-to-back CCS Player of the Year awards. She was named a High School All-American after her senior season.

She went on to play four seasons at Santa Clara University, leading the Broncos to an NCAA championship and winning first-team All-American honors as a junior and senior. In 2002, she won the Hermann Trophy, annually presented to the nation’s top female soccer player, and went on to play for U.S. teams that won Olympic gold medals in 2004 and 2008.

Wilson played for the San Jose Sharks in their inaugural season in 1991, serving as the team’s first captain and playing two seasons for the Sharks. He retired as a player in 1993 after playing 14 years in the National Hockey League, a career that included eight appearances in the NHL All-Star game—that last one as a member of the Sharks.

In 2003 he was named the general manager for the Sharks.

Bruner grew up in Stockton but moved to Cupertino in 1974 to train with the De Anza Swim Club, now known as DACA. A former world record-holder, he competed in two events at the 1976 Olympic Games in Montreal, winning gold medals in the 200-meter butterfly and the 4×200 freestyle relay. Bruner, who swam for Stanford University, was named the American Swimmer of the Year by Swimming World Magazine in 1980.

Martig will be recognized as the Male High School Athlete of the Year. The Los Gatos resident starred in football and track at Bellarmine. He was selected as the West Catholic Athletic League’s Most Valuable Quarterback as a senior and placed second in the 200-meter dash and third in the 100 at the CCS track finals. He is now a sprinter on the track and field team at Columbia University.

Bruckner, the Female High School Athlete of the Year, finished first in both the discus and shot put at the CCS finals last spring. She went on to win the state title in the shot and placed second in the discus. She is now competing at the University of Texas.