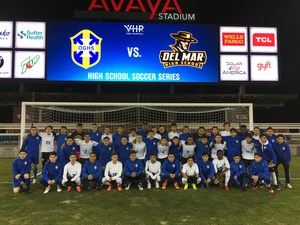 Del Mar boys’ varsity soccer coach made a wish for the team to play in Avaya Stadium, and it came true.
Original article by Jasmine Levya in San Jose Mercury News
Boys from the Del Mar High School varsity soccer team received the surprise of a lifetime from their coach and campus peers.

On Dec. 6 Castaneda’s wish came true as the Dons were invited to the home of the San Jose Earthquakes to take on the Oak Grove High School Eagles. Castaneda told this newspaper he and the school’s athletic director planned for the team to play Oak Grove High a month and half in advance prior to writing his wish. Castaneda is a graduate of Oak Grove.

“It was a great experience for them to walk on the field,” he said.

The match was held in front of students and employees of the high school district with a final score of the Dons winning 3-1.

Castaneda wanted to recognize the hard work his players have put in off the field. He said when he took over the soccer program two years ago 50 percent of the players were not making grades, but now 98 percent are.

“The boys’ soccer team has been doing a great, tremendous job in the classroom,” Castaneda said in a district-released statement. “So I said, you know what, it would be a great opportunity to play in Avaya Stadium where the San Jose Earthquakes play.”

The cost of playing at the stadium was free. However, the soccer team will have to sell some future Earthquakes game tickets in exchange for the opportunity.

Castaneda’s wish was only one of hundreds granted through the five schools within the high school district. In addition to the soccer match, a student was surprised with a visit from her father who she doesn’t see too often because he lives in a different city. Meanwhile, a mother with low-income was given clothing for her new job.

Campbell Union High School District’s five schools are hosting a series of events focusing on raising money, granting wishes and helping others across the nation and around the world. The first event was Nov. 18.

The largest event will be on Jan. 14 when students from the district’s five schools will gather together to prepare meals for the Bay Area chapter of Kids Against Hunger, an organization working to feed hungry children across the globe.