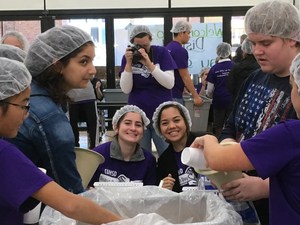 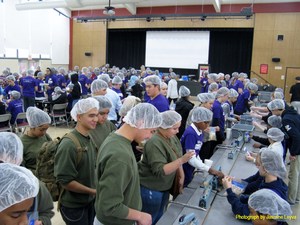 More than 250 students and volunteers filled the Westmont High School cafeteria on Saturday morning to package meals for Kids Against Hunger’s Bay Area chapter. They formed an assembly line and scooped rice, dehydrated veggies, protein powder and flavoring into packages from 9 a.m. to noon. The meals will be sent to families in the Stanislaus County, according to Sherri Leal, the nonprofit organization’s Bay Area chapter executive director.

“We send 237,000 meals to the Philippines twice a year,” Leal said, adding that meals are also sent to Haiti five times a year, and the organization will start sending meals to India this year.

The district’s day of service is just one in a series of events hosted by the five high schools that see wishes granted to students, teachers and district employees. The last event will take place on Feb. 3 at Prospect High School.

This is the second year the district’s day of service teamed with Kids Against Hunger. Last year, students packaged more than 25,000 meals bound for Haiti, according to Prospect High’s activities director Sharon Salazar.

“It was a really meaningful experience,” Salazar said. “I think the students really enjoy the hands-on aspect of putting the package of food in the box and knowing it will go to someone in need. The students want to be here and make a difference.”

According to Leal, each package the students completed contains six nutritional meals at a cost of 20 cents per serving.

Leigh High School senior Bella Myrah was at one of the cafeteria tables sealing packaged meals with a heated bag sealer. This is the second year she has participated.,

“It’s great that the district encourages us to do something like this,” Myrah said. “It feels good to give back and know we can do something to help others.”

Superintendent Robert Bravo got in on the action as well.

“It’s a pretty awesome sight,” Bravo said. “It’s nice to see students doing something that has a local and global impact.”

According to Leal, about 100 meals were packaged by each person there.